My husband and I made the move to Hiroshima from the U.S. in summer 2015. Aside from the inevitable culture shock involved in living abroad for the first time, we also saw a shift in our household working arrangement. In Japan, I would become the breadwinner while my husband would not work. He wanted to find a meaningful cause to which he could donate some of his free time and money. After a very long Google search and a heavy reliance on translation apps, we eventually came across Peace Wanko Japan.

We paid an exorbitant amount of money and endured seven months of bureaucratic paperwork and hoop-jumping to bring our mixed breed shelter rescue to Hiroshima from the U.S. So it goes without saying that the care of abandoned animals is a cause close to our hearts. I thought at first that the Hiroshima Prefectural Animal Management and Welfare Center in Mihara would be a good candidate. Then I discovered that this “Protection” Center was euthanizing thousands of dogs every year (2,342 in 2011) because they don’t have the resources to appropriately handle the number of pets that are abandoned throughout the prefecture.

It was a relief to come across the website of an organization that wants to switch to a different animal rescue model. Peace Wanko’s mission is to reduce the Hiroshima dog euthanization rate to zero, and they are well on their way. They work towards this goal through a variety of methods. First, they opened an off-leash dog park in Jinsekikōgen in 2011, on the far outskirts of Hiroshima prefecture bordering Okayama. At this facility, they house around 200 rescued dogs, while also providing a dog park, pet hotel, and café for anyone who wants to bring their own canine companions.

Peace Wanko is a project of Peace Winds Japan, an NGO that provides humanitarian aid throughout the world following natural disasters. With this in mind, Peace Wanko trains rescued dogs to become rescue dogs at their facility in Jinsekikōgen. Several of these dogs have become famous in their own right, such as Yumenosuke who was featured in international news articles about the rescue operation in Nepal after the 2014 earthquake earlier this year. Peace Wanko rescue dogs also contributed to the rescue effort following the Hiroshima landslides of summer 2014.

While many dogs will spend their remaining days at the ranch outside of town, and some helping to locate survivors in dire situations, there is still a sizable overflow of dogs that have been abandoned and need new homes. Therefore, Peace Wanko opened an adoption facility at Marina Hop in 2014. It is at this small shop, housing 6-10 dogs at a time, that my husband has found his calling as a volunteer. 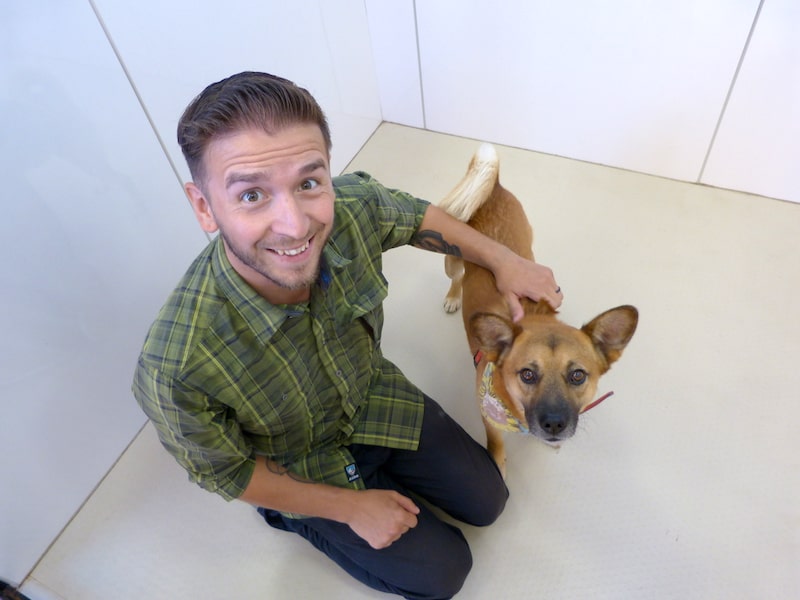 Twice a week, while hoping for passerbys to drop in searching for a new companion, he walks the dogs and cleans their cages. He also spends time trying to acclimate them to healthy relations with humans through gentle petting and treats, as many have severe anxieties from histories of abuse.

While we aren’t able to contribute as much as we would like, it has been thoroughly rewarding and motivating to see so many dogs get adopted by new families. In the meantime, we are there to support them. So if you’re ever looking for a new furry friend, or a great local cause to donate your time and/or money to, consider dropping in at the Peace Wanko adoption center at Marina Hop. If you are considering adoption, petting is free and welcome.

For details about how to donate to Peace Wanko via postal or bank transfer visit http://peace-wanko.jp/donation
Cash donations are also very welcome at the Marina Hop adoption center.

Kismet moved to Hiroshima in 2015, and has been loving every second of it. She enjoys when people write quippy remarks in bios, but has no idea how to do so. One thought on “Peace Wanko”