Every year on the November 3 ‘Culture Day’ holiday, an impressive fire walking ritual takes place in the forecourt of Daigan-ji Temple on Miyajima.

The fire walking itself happens in front of the Gomadou Hall which contains a large image of the fearsome-looking guardian deity Fudoumyoo. The burning of cedar sticks while chanting sutras, called goma and believed to purify and ward off evil spirits, takes place here in this hall.

The fire walking ritual is goma on a bigger scale, conducted in the open-air, with Fudoumyoo himself (itself?) present in the smoke released by the burning cedar through which adherents pass while walking barefoot over flaming embers. Although Daihan-ji is said to have a history stretching back to medieval times, this annual ceremony only dates back to 2006 when the Gomadou Hall was reconstructed.

Members of the public are also welcome to take part in the ritual and devotees pray for, amongst other things, eternal peace, happiness for all people and plentiful harvests. As a bonus, the ritual is said to be efficacious in both ridding oneself of misfortune and bringing good luck. I cannot claim to have anywhere near a full understanding of what was going on during the lengthy (2-3 hours) ritual which I stumbled upon by chance, but here is an outline of what I saw with additional information I have managed to glean from here and there.

I happened to walking through the temple precinct with my family shortly before things started and noticed the large rectangular pile of wood, covered with green foliage ready to be set alight. Initial activity, however, was centered elsewhere in the precinct, in front of in front of what is one of Japan’s three most famous Baizenten temples. A group of men dressed in the white robes and carrying the large conch shells of the yamabushi mountain aesthetics lined up behind three men in priestly robes. After paying their respects, the group processed to the Gomadou Hall where more chanting occurred. After this, the focus of events turned to the beautifully prepared sacred bonfire. The yamabushi waited on the other side of a rope while enacting a lengthy ritual during which they appeared to be asking of permission from Buddhist priests to proceed into the enclosure and begin preparations for the fire walking ritual. 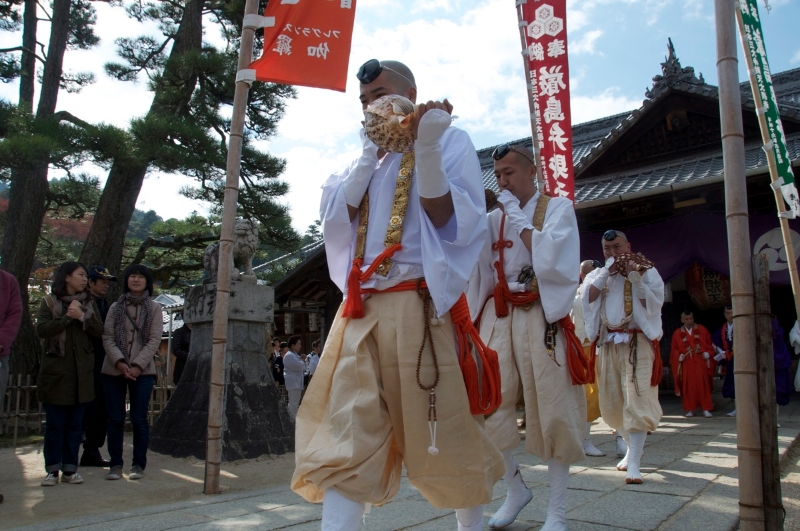 Once allowed into the enclosure, the yamabushi went through a series of rituals which are said to represent the cutting away of earthly desires – such as making the actions of clearing a path through a dense forest with a large axe, ritual firing of arrows in several directions and slicing with swords. After these rituals the bonfire was finally lit. Throughout, there was a constant drone of chanting, the ringing of bells and the blowing of conch shells. The smoke that escaped from below the greenery laid on top of the bonfire was incredible. It billowed back and forth in a huge cloud, that almost seemed alive – it brought to mind the black smoke from the TV series LOST. After the flames raged for a while, and it seemed that the fire was starting to die down, they were once again stoked by the addition of nadegi votive tablets and shamoji rice paddles which were thrown on by the box load. The yamabushi and priests eventually made their walk over the embers – the flames were no longer as intense, but they were by no means extinguished. Then, once the flames had died down considerably, members of the public make their own walk of faith. Some carried onbe (wooden wands decorated with shide paper streamers) before them which they had paid ¥1000 for, and others cedar nadegi which has set them back 300. The Daigan-ji Temple Hiwatari-shiki Fire Walking Ritual is held on November 3. Rituals begin at 13:00 with the fire walking climax at around 15:00.