Miyoshi Fudoki-no-oka [みよし風土記の丘] is a hilltop park where the main attraction 3000 ancient kofun burial mounds over 1000 years old. There are two main clusters of tombs – the Joraku-ji and Nanatsu-zuka clusters.

According to the Hiroshima Cultural Encyclopedia

The Jorakuji Kofun Group has some large circular and scallop-shaped mounds in its center, each of which is accompanied by smaller circular and square mounds. The Nanatsuzuka Kofun Group consists of large circular, keyhole-shaped and scallop-shaped mounds, surrounded by smaller circular mounds and square mounds. The majority of the mounds were constructed in the 5th to 6th centuries. There isn’t much explanation about the tombs in the park and those interested in going “deeper” should check out the History and Folklore Museum at the park entrance. With winding paths and lovely pine trees, it is a really nice place to walk around. As well as the kofun, there are reconstructions of ancient dwellings, a display of farming materials and an Edo-era family residence to take a look at. 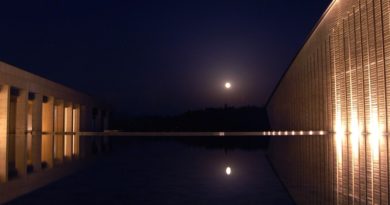