As part of an ongoing renovation of Hiroshima’s Peace Memorial Museum, the installation that has been part its exhibition since 1973 will be removed from public display on April 26.

Three plastic figures, of a mother, her child and a female student, stand in a diorama titled Hovering between life and death. Attempting to flee the burning city, arms outstretched, their clothes are tattered and skin hangs from their badly burnt limbs the figures are an attempt to visually represent survivors of the A-bomb blast about 2km from the spot above which the bomb exploded on August 6, 1945. The debate about and the 2013 decision to remove the installation has been covered widely in local, national and international media. Although 91 year old Sunao Tsuboi, chairman of Hidankyo (The Japan Confederation of A- and H-Bomb Suffers Organizations) stated during deliberations

From the viewpoint of a survivor, they do not reflect the reality of the disaster and are just toys.

there has been strong support for continuing the exhibit and over 10,000 signatures were collected and submitted to the Hiroshima Municipal Assembly to asking the museum to retain it in the renovated exhibition, due to open in July 2018. A degree of controversy has surrounded the figures ever since they were first proposed and Stefanie Schäfer discusses what the Chugoku Shinbun newspaper called the ‘realism controversy’ (riaru-ka ronsou) in some detail in her 2008 paper The Hiroshima Peace Memorial Museum And Its Exhibition.

In the early years of the museum, archived items of clothing that had been worn by people exposed to the bombing were displayed on six simple wooden mannequins – representing two housewives, two high schools students and two soldiers. 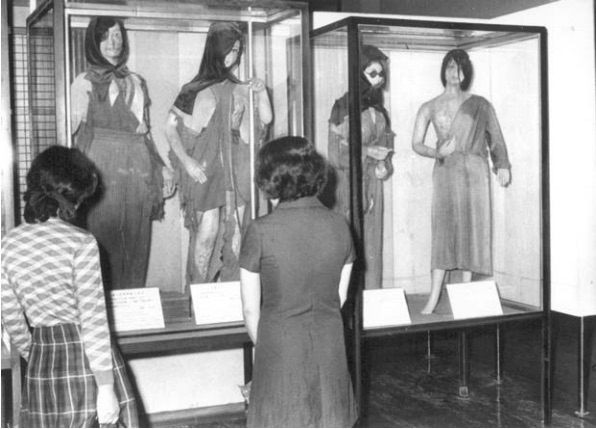 These wooden mannequins are featured in the opening scenes of Alain Renais’ 1958 film Hiroshima Mon Amour.

In 1972, Hiroshima City Council decided to replace the wooden figures with the three wax figures in an attempt at a more realistic representation of the effects of the atomic bomb on its victims and what survivors had to endure in its aftermath. Originally placed against a background of an enlarged version of an artwork by A-bomb survivor Yoshiro Fukui, the figures of two women and child were later placed in a diorama which depicted a specific location in the Kannon area. The Peace Memorial Museum, called the shiryokan in Japanese (a place which collects and displays documents and other materials, or in this case material data) grew out a collection of A-bombed relics picked out of the rubble of the ‘burnt plain’ by local geologist Shogo Nagaoka who became the museum’s first curator. The fact that these objects were been subjected to the A-bomb blast imbued them with great meaning and they were elevated to the status of ihin, “not simply a leftover from the past, but a legacy and therefore and obligation… By representing those who were no longer present, the ihin demanded that the dead should not be forgotten.” (Shafer)

At a time when a new generation that had never experienced the war was coming of age, Hiroshima Mayor Setsuo Yamada, who proposed the introduction of the figures said

The current arrangement is not in accordance with the actual situation after the bombing.

Care was taken to make the new figures as realistic as possible. Specialist craftsmen were brought from Kyoto the who created the wax figures out of “medical material” based upon interviews with doctors who had treated A-bomb survivors. Kazuharu Hamasaki, who was the museum curator at the time, recently recalled

The creators wanted to recreate the figures down to the finest detail, even paying close attention to the condition of the skin of the victims right after the bombing.

Nagaoka was opposed to the idea from the start. For him, the ihin alone, “provided the only legitimate access to the ‘truth of the atomic bombing’”. Presaging Sunao Tsuboi’s comment quoted above, the then chairman of Hidankyo, Ichiro Moritaki said

The burnt clothing is sufficient. No matter how hard we try to reconstruct, artificially, the situation of that day, we can never represent it”, describing what the city government called “realistic” as “artificial.

Nonetheless, the new exhibit went ahead. In a 1991 renovation (when fuller historical context to the bombing was added), the wax figures were replaced by plastic figures, this time a mother, child and a female student, said to be between 1.5 and 2km from the bomb’s hypocenter. The display area was darkened and red lighting introduced to allude to fires raging in the burning city.

Issues around authenticity and realism still divide opinion, but many visitors have commented that the figures do help convey a sense of the aftermath of the bombing, allowing them at least try and visualize the unimaginable. Others find them crass, some a little hokey, inappropriate in a world-renowned museum in the 21st century.

One person’s sideshow is another person’s trauma. Akihiro Katsube, the 43 year old leader of the signature campaign to preserve the exhibit, has asserted

The dolls make a strong impact on children and are necessary as a way to convey how horrible the bombs are.

However, you do meet many people in Hiroshima who tell of being terrified by the figures as young children, and were then put off from engaging with issues surrounding Hiroshima’s history and wider peace activism.

This is an issue my wife, Joy, and I have struggled with bringing up our own children in Hiroshima. Our eldest son used to dread school trips to the museum and would avert his eyes and march past the figures as quickly as possible. I did wonder whether he should be facing the facts of the reality that kids of his own age in his own hometown were forced to experience 70 years ago. He is now 14 and a Junior Writer at the Chugoku Shinbun. They interview hibakusha A-bomb survivors and try to help spread their messages among young people. I wonder if he would he have been doing this if he’d been forced to to experience a “little” trauma as an elementary school student.

Tomorrow, the main section of the Peace Memorial Museum will close for the final stage of the museum’s renovations (the east wing will reopen on the same day) and when the entire facility reopens in July 2018, the figures will be gone. The Mainichi Shinbun reports that the museum plans to exhibit “more of the A-bomb victims’ possessions and other artifacts rather than items like the reproduction figures, to focus more attention on the people whose lives were changed or ended by the bomb” and that a representative of the Hiroshima Peace Memorial Museum stated that images of the figures will continue to be shown on the museum’s web page. The museum also stated that they may be featured in another way, such as in a separate exhibit.