This week I decided to go for something a bit different and talk about the seating areas that are designed for people to take a break at and enjoy their food and drink at within konbini [コンビニ].

In Hiroshima there are quite a few. In fact, as I sit here writing my column for this week I am indeed using one as we speak… or should I say as I write? You know what I mean.

The one I’m currently at is located in the newest 7-Eleven in the Shareo underground shopping mall. This is on Shareo Nishi “Street” which heads towards the Peace Memorial Park (not to be confused by the 7-11 on the corner of Nishi and Kita “streets”). Nishi is colour-coded blue for konbinience (okay, okay, I know that’s lame). 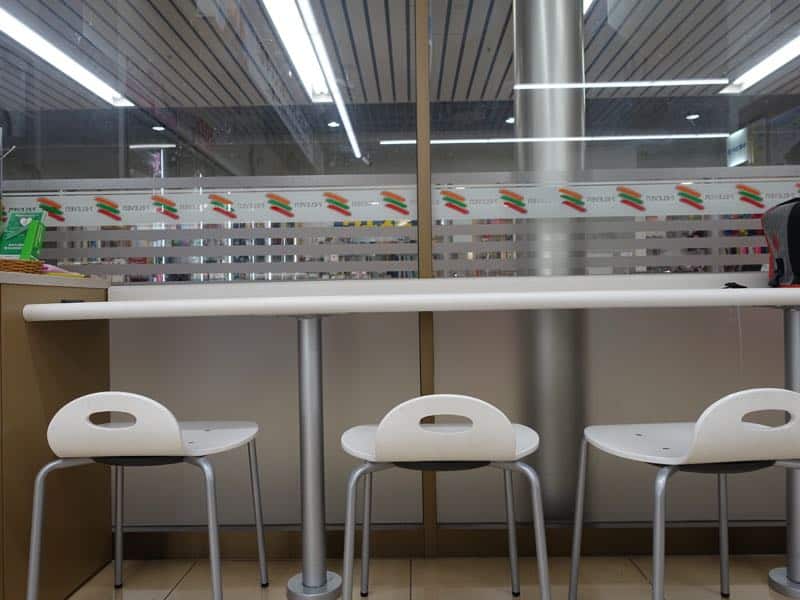 The seating area is at the back of the store. It’s a little hidden, but thus offers some privacy. There is also seating area in the 7-Eleven on “Densha-dori” that is closest to the Peace Park (between the Edion electronics store and the Orizuru Tower). In fact, it’s almost directly above the one I’m sitting at now. It’s on the second floor and gives you a sort of bird’s-eyes view (if you were a low-flying bird that is) of the old baseball stadium area and its surroundings. Although all these konbini are open 24/7, this “Eat in space” is available from 7am to 9am. Also, smoking and consumption of alcohol are prohibited. There are no power outlets in either of these 7-Elevens, but, if you are desperate, you can pop your plug into the outlet next to the toilet that’s used for the heated seat. Another good space is at the Family Mart on your left as you’re heading towards Hiroshima Station (away from Peace Park), again, on Densha-dori. Take care as there is a rest spaceless Family Mart right across the steet. It is right in front of the exit #5 from Shareo’s Higashi “Street”.

Here, there are several tables and some counter seats, complete with power outlets. Family Mark also advertises its own free WiFi service, which you can use for 60 minutes at a time, a maximum of 3 times a day. There’s even some art on the walls. This space can be used from 7am to 10pm. A fair bit further along the Densha-dori, at the last Family Mart before you reach Hiroshima Station,is another counter seating area. Check out the map below for the exact location.

Here you can sit on high stools and pretend you’re drinking and/or eating at a fancy bar. Unfortunately though, I’m usually eating from a plastic bento [弁当] lunchbox and not sipping on a fancy drink with a little parasol. And I’m not on holidays and I don’t feel at all relaxed. Right, it’s NOTHING like a fancy bar. Sigh. I need a holiday. Can you tell I need a holiday? All these locations are great for people watching. In fact, I actually prefer the ground level ones because it means you can see facial expressions of the people who pass. Some people look bored, some indifferent, but many look tired and may in fact join you at the seating area if you smile nicely enough. That’s never happened to me, but hey, at least I’m spreading the love.

The great thing about these spaces/places is that they allow you to take a seat. As long-term residents will know (and visitors from overseas will find out), Japan is not big on, or great at, providing places for the tired and weary to take a load off. Tourists who have heard that eating whilst walking is rude in Japan are often frustrated, justifiably so, I think, to find a distinct lack of public seating. In many cases, they just say, “Stuff it!” and eat on the go. I totally understand.

Anyway, I don’t want to end this week on a negative note, so I will sum it all up by saying that many konbini are opting to install seating areas that provide a kind of café atmosphere. I’m all for it and after you try one or more of the places above, I’m sure you’ll agree.

Now they just have to play some French music and I could imagine I’m in Paris.

Have I mentioned I need a holiday?