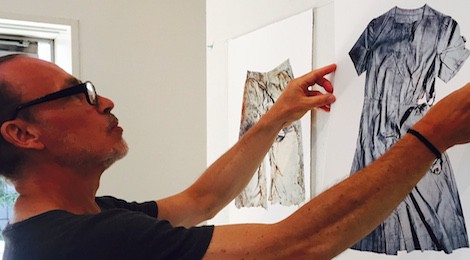 “It’s as if the clothes say, ‘See the radiation in my body,’” Michel Aguilera describes the subjects of his most recent photographic collection. He spent a month at the Hiroshima Peace Memorial Museum in 2006 photographing the ragged, stained remnants of what Hiroshima’s sons and daughters, mothers and fathers wore when they perished from the atomic bomb 70 years ago this month.

Aguilera points to an image of a dress with red bleeding up from the hem, explaining that the dress is red, but when he photographed it using a unique process called calotype, the radiated area lost its vibrant color.

Calotypes are one of the oldest forms of photography, developed in 1840, and created by using a large, wooden box camera to develop sepia-toned negatives. Aguilera shoots in color, giving his images the patina of a painting. Each photo took him half a day to shoot.

I met the French photographer last week in Hiroshima, as he hung his work for an exhibit to coincide with the citywide commemoration of the bombing, bringing the 70-year-old garb back to life.

Before this, Aguilera had been photographing clothes for a broader series that included clothes discarded by gypsies. When the Parisian photography professor traveled with his students to Hiroshima in 2005 and saw the artifacts in the Hiroshima Peace Memorial Museum, he was struck.

“I had to photograph them,” he said, his eyes darkening.

The thirty images of the disembodied shrouds floating on white backgrounds create a surprising universality. Although deeply personal and intimate, each pair of pants, each work uniform, each school dress could be anyone’s – my dad’s, my aunt’s, my sister’s – or mine, giving the exhibit of historical garments a contemporary immediacy.

Each image is accompanied by a description of the clothing’s owner, researched by the Hiroshima museum. For example:

School uniform jacket, exposed at 18 ft from the hypocenter “Tatsuya, 14 year old schoolboy, was standing in the playground when the bomb exploded. His whole body was burnt; he helplessly tried to escape by the wrecked road, but collapsed halfway [home]…He was taken to his home by neighbors who had recognized him. Due to
his clothes being stuck by the burn to his own skin, his mother had to cut them off him in order to undress him. Since there were no drugs, Tetsuya was treated with potato dyeing, and each day, they would remove one by one the flies’ larvae that had developed in his infected wounds. Tetsuya remained immobilized for more than one month, and died calling out for his mother in the morning of September 16.”

Aguilera’s artistry is evident not only in his photography talent, but in the way he displays each article, unveiling an unexpected meaning. The rips in a pair of dark pants reveal an outlined crucifix in the inseam, the blood stains on a school uniform saturate a student’s name tag that, like all children’s uniforms, listed his blood type along with the name of his school. “It’s like there’s a message in the clothes,” Aguilera’s gaze caresses his image of the ripped pants. As one who has told and retold war victims’ stories, I recognize his fatigue with living with others’ pain and his conflicting inability to let that pain go. I am most struck by the image of a super-saturated purple dress. The accompanying description describes a 23-year-old woman, Setsuko, who crawled her way out of her destroyed office building and made her way to her uncle’s home. Three days later, her mother finally found her. But Setsuko’s body was so hot, her mother was unable to hold her as she died twelve days after the blast. Setsuko had made the dress she was wearing to work that day.

Aguilera “posed” the dress with its skirt swinging. “I like to imagine her last moments were dancing,” Aguilera smiles wistfully, almost believing himself.

Kelly Hayes-Raitt, a Santa Monica resident, visited Hiroshima and Nagasaki for the 70th commemorations of the atomic bombings and blogs at LivingLargeInLimbo.com. She can be reached at [email protected] Michel Aguilera’s “Vêtements de Hiroshima” exhibition continues until August 9 at gallery G. Click here for more details. A-bombed tram back on the rails this summer