Delightfully wacky museum housed in an old school building north of Miyoshi dedicated to the art of paper folding.

Take a steep turn up a hillside off a local road just within the boundaries of Miyoshi “City”, close to the border of Shimane Prefecture and you will find the Kimita Origami Museum [君田折り紙博物館]. Two towering traditional Miyoshi ningyo dolls welcome you as you drop down the gears to pull up in front of the museum housed in the now closed Kimita Elementary School. We visited during a heavy snowfall and unfortunately the former elementary school teacher and origami master, Akagi-sensei, who is in charge of the museum had already left for home. Instead, after paying our ¥200 admission fee, we were shown around by a lovely old lady who, despite the cold (kerosene heaters aren’t allowed in the classrooms now used as exhibition rooms due to the risk of fire), dutifully switched on the lights as we moved from room to room, explaining the exhibits as we went.

Origami on display, many of which were, incredibly, created out of a single piece of paper, ranged from the cute little animals you may have created in kindergarten to animated characters, intricate 3 dimensional artworks, huge constructions and expansive landscapes.

If you want to raise your own folding skills, lessons with Akagi-sensei can be booked for ¥500 a person (waived for elementary school kids and younger), plus a ¥200-300 for paper. Below is a sample of what is on display, but if you find yourself in this neck of the woods, we highly recommend popping in. This is a good place to combine with a visit to nearby Kimita Mori-no-izumi Onsen hot spring. One of eight Orochi dragons The whole of the 47 Ronin Ukiyo-e Woodblock Print Series Exhibits spill out into the corridor The view from the museum was particularly lovely in the snow 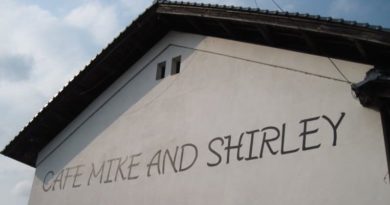